The Sisters of St. Charles Borromeo > Where We are > Western Province > Belgaum, Nirmal Nagar

St. Charles Convent Prem Nivas is in the Diocese of Belgaum (Belagavi) and is situated in Nirmal Nagar Belagavi District of  Karnataka State. Nirmal Nagar is beautiful place 16km away from the City and 2 kms from Sambra Domestic Airport and Airforce training Centre. This village is surrounded by 20 villages.

The founder of Nirmal Nagar is Rev. Fr. Thomas Tharayil a diocesan priest from Bellary diocese, came to Balekundri near Sambra to continue the Jesuit Mission. He then wanted to shift the school and the orphanage  to another place with better facilities for the school children. At his own cost he bought the land. After the long struggles he managed to shift the school and the orphanage to the present location. He had special devotion to the Immaculate Heart of Mary. He was inspired at Lourdes near the Grotto to name this campus as Immaculate Town, meaning Nirmal Nagar and he put it under the patronage of our Lady and the foundation stone was laid on 22nd August 1963. In those days the Feast of Immaculate heart of Mary was being celebrated on 22nd August.

It was his dream that boys orphanage, school, hospital and the Church should be in one campus. Initially the Bethany sisters were invited to this place. They were working as headmistress and teachers in the Pry. School and as wardens in the Orphanage till 1971.

In 1971, Fr. Thomas Tharayil started the Hospital project but the Bethany sisters did not have any trained medical personnel, hence they had to invite Sisters of Charity of Jesus and Mary from Amrithsar. But they could not communicate in kannada and were finding difficult to manage the hospital and also this was their only community in the south of India.  They were in Nirmala Nagar till November 1979. 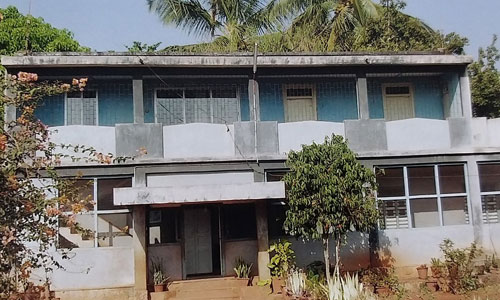 On 14th December 1971 Nirmal Nagar experienced a great loss as they lost their founder and beloved father. Rev. Fr. Thomas Tharayil died of heart attack at Wanless Hospital, Miraj. As per his wish on 20th December 1972 foundation stone was laid for the construction of the Hospital by Shri K. R. Ramachandran IAS Divisional Commissioner. It was blessed by the then internuncio.  For the inauguration of Nirmal High school building Fr. Thomas had invited as president, the Archbishop of Bombay, Cardinal Valerian Gracias who was the first Cardinal of India. Fr. Thomas in his Inaugural speech mentioned that his next plan was to build a Hospital in Nirmal Nagar for the local villages. In the Presidential speech, Cardinal gracias promised Rs. 20,000/- towards the Hospital project. That’s the reason why this Hospital bears the name CARDINAL GRACIAS HOSPITAL.

Since the SCJM sisters could not manage the language the Bishop was on the look out for the sisters of another congregation, who knew Kannada and who were involved in the medical apostolate as their Charism. The then Bishop of Belgaum, Bishop Ignatius Lobo approached the then Provincial Sr. Benedicta Lobo. It was coincident that the Congregation was celebrating their golden jubilee of Indian Mission that year. At the request of the Bishop, the congregation took up this new mission as the Golden jubilee memorial. Sr. Benedicta and one of the councilors along with the Bishop visited the place and agreed to take up this mission on the leased land of the diocese.

The pioneers of St. Charles Convent, Prem Nivas Belgaum Sr. Carmel (Celine Dsouza), Sr. Antonio and Sr. Hilary were given a warm welcome by the Bishop of Belgaum on 11th November 1979 in the Bishop’s house and on the next day the12th of November the Provincial Sr. Benedicta along with the pioneers had a grand welcome by then Parish Priest Fr. Peter Veigas, the SCJM sisters, boarding boys and the school children. The SCJM sisters stayed with them for the couple of days and handed over to them the Hospital and the Convent and left the place. Sr. Carmel was the first Superior. Sr. Hilary, the nurse took up the charge of the Hospital. Dr. A.S. Godhi was appointed as RMO of the Hospital. After him the well experienced Dr. Manohar Moses Chopade joined the Hospital as Medical Officer in 1979 and worked with the sisters for several years until his death in 1996. He was a very dedicated and committed Doctor who worked tirelessly with ‘SERVICE FOR THE POOR’ as his motto not considering his monetary benefits.

There was whole hearted welcome for the sisters by the villagers. Sr. Hilary put her whole heart and mind bringing up this health mission, visited the villages in the mobile ambulance, treating the patients in the room provided by the panchayat. Sisters used to go to Sambra, where the Commander had given the room to treat the patients. Sisters were involved in the Pastoral care, Sacristy work, accompanied the Priest on Sundays to Sambra substation to celebrate the Eucharist. Sisters trained the orphan boys for the carol singing and that year for the first time in the history of Nirmal Nagar there was carol singing in the surrounding villages. The eve of Christmas was a day of rejoicing for the 150 boarders of Nirmal Nagar. Christmas tree was arranged on the hospital terrace and gifts were distributed. Oh what a Joy it was!

Everybody was taken up by our simplicity and hospitality. Mother general Marie Henritta visited the sisters on 18th January 1980 and on 26th December 1984. Our mission continued. Sisters started visiting the villages. In view of increasing number of patients, we started the evening OPD. Deshnur health mission which was started in 1980 is still continuing after few years of discontinuation. Deshnur is a poor village which is 22 kms away from C.G. hospital, where the Jesuit Swamijis have an orphanage, school and the mutt. Now every Thursdays in the afternoon a health team from C.G. hospital provide medical help to the villagers.

Initially we took up the challenging mission of mothering the abandoned children, healing the sick, Pastoral activities, Mother and Child welfare program, Social work and teaching. For few years we had the HIV/AIDS project supported by the government.

The hospital continues to provide primary health care for the patients from the surrounding villages. We have MCH services, Immunization programme, Emergency care, X-ray and USG facilities, a well equipped Operation theatre for emergency cases and pharmacy.  We have also taken care of a large number of poisonous snake bite patients. The convent was renovated in 2004 and the Cardinal Gracias Hospital renovation is going on at present.

Cardinal Gracias Hospital is considered as a rural bond centre for St. John’s Academy of Health Sciences. Hence, we are privileged to have the services of the graduates from St. John’s Bangalore.

This year we are planning to start the Nishlalanka DE – ADDICTION AND REHABILITATION CENTRE for the men from the surrounding villages. Work is in progress.

Few details about patron of the Hospital 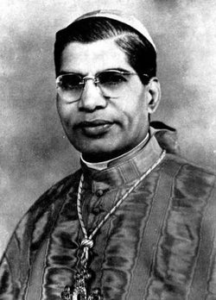 Cardinal Valerian Gracias was the first Indian Cardinal of the Roman Catholic Church. He served as Archbishop of Bombay from 1950 until his death and was elevated to the rank of cardinal in 1953 by Pope Pius XII. Born on 23rd October 1901 in Karachi, Sindh, Pakistan entered the seminary in Mangalore, later pursuing his studies in Kandy, Ceylon and Rome, Italy. He was ordained priest in Kandy on 3rd October 1926, served as secretory to the archbishop of Bombay and as Chancellor of the archdiocese. Valerian Gracias became the first Indian rector of the pro – cathedral of the Holy Name of Bombay in 1941.

He was appointed auxillary of the Archdiocese of Bombay 1946, he was promoted to the archboshopric four years later following the resignation ofJesuit prelate Thomas Roberts. Pope Pius XII created him Cardinal Priest with the title of Santa Maria in via Lata in the consistory on January 12th 1953, becoming thus the first Indian to be elevated to the College of Cardinals.

He was the president of the Indian episcopal Conference from 1954 to 1972, during this time the whole archdiocese was reorganised with the construction of churches, hospitals and the schools. Awarded the Padma Vibhushan by the President Radhakrishnan in 1966. He attended the second Vatican council. During his tenure the first papal visit to India was arranged, the Marian Congress of 1954 and International Eucharistic Congress of 1964 was organized. A highly renowned orator, a great organizer died of cancer on 11th September 1978 at the age 76 in Mumbai. We are privileged to have such a great person as the patron of our hospital. There is one more Cardinal Gracias Hospital in Mumbai named after him.