The Sisters of St. Charles Borromeo > Where We are > Western Province > Bhadravati, Old Town

A glance at the history of Nirmala Hospital, Old Town, Bhadravathi.

From humble beginning comes great things, such of one is Nirmala Hospital.

It is a fruit of love created by those who loved to dream and dreamed of love, and the dreamer and the visionary is Mother Virginie. Bhadravathi derives its name from the Bhadra River which flows through the city. It was earlier known as Benkipura (or Venkipura), which in English means “city of fire” in the district of shimoga. In those days in 1950s this place was without health facilities for the poor villagers.

Mother Virginie’s dream and Vision was supported and added colour to this new mission by the strong and visionary people Mother Jean Marie, Fr.Harou and Mrs Van de-JKerchov, and several others dreamed for Christ, toiled and wore out for Christ and the dream came true, the dream called NIRMALA HOSPITAL.

God had his designs, Mother Virginie never spoke about it to anyone but quite unexpectedly, on 1st May, Mr.Madhavachar the Municipal President of the Old Town Muncipality came to visit her and offered to provide, the land and other facilities if the sisters were ready to open a maternity hospital in old town area. The idea caught Mother Virginie, it was in 1951, as a good religious and always practical she referred the matter for approval to Mother General Mother Adele and to Bishop Mgr. R. Feuga.
Mother General gave her whole hearted approval. 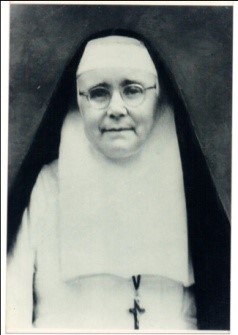 THE DIFFICULTIES AND HARSHIPS

The Provincial Council of St.Charles refused the plan because it was unrealistic and even the Bishop was not for it, the reason he said was our congregation is not able to undertake hospital. Sisters did not own any land, building, equipment, and trained staff.

They had no source of income for a charitable venture but Mother Virginie knew that the Lord was on her side and nothing could prevent her from leaping in the dark.
Mile stones achieved in the realization of a dream . on Jan 31st 1953 Mother Jean Marie takes Mother Ursula and Ms Francisca takes to Philomena’s Hospital Bangalore for 18 month training in midwifery.
August 5th 1952, Mother Veronica gets a medical seat in Medical School Bangalore and March 24th 18th May 1956 Passed Her Exam L.M.P (Licentiate in Medicine)

Mile stones achieved in the realization of a dream

05.10.1952 : first sanction of land 200 X 200 in old town.
07.12.1953 : sanction of the government order
18.02.1954 : the land was handed over to the authorities of Nirmala Hospital.
03.06.1954 : laying the foundation stone by D.C.
07.10.1955 : Opening ceremony of the hospital by Mgs. Feuga, Bishop of Mysore, and Mother General Ann-Marie Carlier.The Deputy Commissioner of Shimoga C.V.K.Rao after the ribbon cutting ceremony, he enters through the Main Door and Declared “ NIRMALA HOSPITAL OPEN ” A big group of people and invitees were present.
27.11.1955 : opening of maternity section
Mission:-Dispensary, Mobile clinic and Maternity home, to take care of the health needs of women and children.
Fondling home to take care of the orphan and abandoned babies.
Pineers: MotherVirginy, Mother Jean Marie Srs.Francisca, Ursula and Veronica.
As the number of patients increased in the hospital, it was an urgent need to expand the hospital.

1981 : Remodeling of the dispensary took place
1984 : Expansion of the health work to Karehalli village and surrounding villages. Foundation stone laid for health center at Karehalli by Mother General and blessed by Fr.Peter parish priest of old town.
1985 : Blessing of health center and inauguration by Rev.Mgr. Thyil
In 1994 health aids training programme started for poor girls of the locality

1995 : Blessing of the sister’squarters took place as the present rooms of the sisters had to be given for patients.
1995 : Modernization of the hospital with a pharmacy,operation theatre, installation of X- Ray and Ultra sound machine.
2003 : Construction of the second floor of the hospital, blessed by Bishop Gerald Isaac Lobo and inaugurated by Mother Benedicta, Superior General.
Mother Benedicta, the Provincial Superior visited Bishop Isaac Lobo, Bishiop of Shimoga. He requested Mother Benedicta to open a nursing school at Nirmala hospital, Bhadravathi. On her return to the community, she shared the request of Bishop and discerned with the community. Though we did not have trained sisters to take up the nursing school, all unanimously agreed to the proposal. Thus, the dream of having a nursing school was realized in 2004.
1955-2005 : Golden jubilee of Nirmala hospital, to time to recall the blessings of the Lord on the institution.
2010-2011 : Permission granted for B.Sc. nursing by Bishop Gerald Isaac Lobo
Nov 2011 – 2012 : College of Nursing New Building was Inaugurated.
2012 : Renovation of the OPD block, a spacious outpatient department which was a most needed dream realized.
Present Mission: Medical, Social, Pastoral Education (College of nursing) Health aids training.
Now we have a 250 bedded hospital.